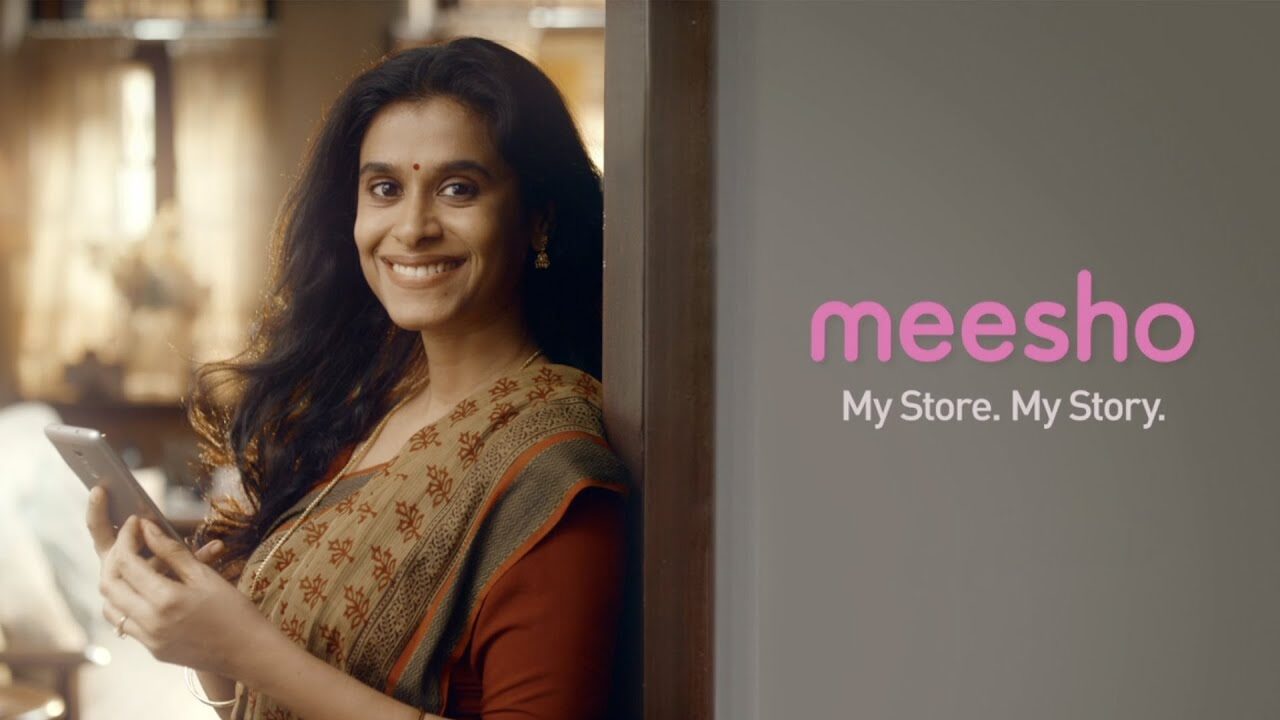 MEESHO (short for ‘meri shop’) has deemed to be one of the biggest startups in India currently. It holds value in terms of selling through the website and reselling through social media applications such as WhatsApp, Facebook and Telegram. This platform provides access to a large number of people for the purpose of reselling products, most of whom are housewives or elderly people.

A brief history of MEESHO, it was founded by IIT graduates Vidit Aatrey and Sanjeev Barnwal as FashNear. FashNear was also an e-commerce platform that was fashion-oriented, and soon after, MEESHO was adopted. The company mainly consists of these four aspects; supplier, reseller, company, consumer.

The supplier provides the goods onto the platform, and the reseller then captures pictures and details about the good and publicises it around on their social media platforms. Once a customer is interested in the product, the reseller places an order on the website. This then leads back to the supplier to keep the product ready for pickup facilitated by MEESHO itself. Pick up, and delivered. Customers that are interested in long-tail items are typically sold to by these resellers, entailing a recurrent and loyal network of consumers. The aim is to offer huge quantities of unusual items to clients, therefore these products are supplied by specialised producers.

The commission acquired by the reseller would be after the delivery of the product by MEESHO itself and not the supplier. This model of function worked in great efforts.

Now the conceptualisation behind MEESHO had originated from their primary audience of women. Empowerment of women have been their key motto since the development of the idea. There was a lot to hassle with women entrepreneurs and the prospective budget, especially logistically.

With MEESHO, all they have to worry about is the safety and the quality of the product they’re selling and the advertising and delivery is taken care of.

An aspect to factor in was the capital required to start a business which most housewives, elderly people or students don’t have. For those starting out in the field, it was important to have a business website to put out their catalogs and brand content but did not have the capital or time to build it.  Self-employment as a term, was conjured here for these individuals to make their income out of the platform. Whether it is by supplying or reselling.

This enabled women housewives to create a whole space for themselves and make an income out of it. This was their selling point, and it worked. Catering towards empowerment led to a cause of uprising for women to do something they love but in the comfort of their own homes. Nearly 90% of the venture’s members are women, including students, housewives, and company entrepreneurs. Even so, the country has about 9 million entrepreneurs who are women.

Hence, they designed their whole audience catered to such individuals. They aspire to communicate our value offer to a large number of aspiring women, and they believe there is a lot of value in doing so.

The company sets sail as a startup in 2015 and now brings forth the downfall of Amazon and Flipkart. From fashion to groceries, MEESHO offers a range of products to put forth. The company promotes its brand image to be similar yet different from high-end companies like Amazon and Flipkart. In similarity, the structure of all three companies are B2C in nature. In difference, the supply of products differ in MEESHO being more locally sourced than the others. This also is in contribution to the small business sectors that the company enables to bring in an income. Although, a con would be that this bring in a gateway to fake identities and purchases to trick the customers as well as resellers.

During the Covid-19 pandemic, the company had hit a new low. The company had to dismiss about 200 employers due to the situation and had the lowest year in the past five years. This in return meant a bad state for the entrepreneurs and resellers. Due to the country going on power saving mode, the demand for the products had also decreased to a significant rate. However after the lockdown rules had been lifted, the company went on a full drive. This entailed handing out small loans for the entrepreneurs as well as the resellers so help stand their feet and build their business in a smaller rate.

This helped the businesses to do way better than how they were, pre-Covid by a 25%-30% increased rate. This developed a new found equation between the company and the entrepreneurs and the company had turned a big promotion for brand loyalty because of how they took to their hand to help the suppliers.

When it comes to campaigning, MEESHO takes to TVC and social media profoundly. We see below two TVC advertisements that gained popularity for the company and the message they build to get across.

My Store My Story

Although MEESHO campaigns a lot through social media platforms, their TVC campaigns have a great deal of audience as well. The TVC campaign #MyStoreMyStory exhibits a storyline for empowerment that correlates with their brand ordeal. MEESHO has approximately 17 million distributors, 15 million women, and 60,000 suppliers on its network, which has over a million dealers. Hence, it brings into perspective the campaign towards their women audience.

The hardships of being a homemaker and being addressed by different names but the company creating an identity for women themselves was a campaign structure that DDB Mudra powered through. This entails the social barriers that women have to uphold to keep intact for the family and hence can also generate an income by doing a work they love. That wraps in up with the final ending line of ‘Not just a homemaker, a Meesho Entrepreneur’, as a slogan hold.

The campaign, #SabseKamCommission, was to put in light the commission rate that was taken from the suppliers in accordance to the sale of their products. Wunderman Thompson had developed this concept and it perceived the structure of how MEESHO works towards the aim of reduced commission as low as 1%. This marketing strategy catered to everyone who had their small businesses launched, especially during the difficulties of the pandemic.

Due to multiple logistical factors, the small business owners had minimal factors to worry about as the venture could cover it. Going offline took a major turn with the development and recognition of these businesses and the goods they sell. Through their social media networks, these businesses connect clients with suppliers from all across the country, which had all come to a halt due to unexpected situation. With this campaign, they intended to convey that there would be maximised profit for the supplier because of the low commission, which was highly beneficial.

In effect, the campaign turned out to be very popular. It promoted their growth of more than one crore resellers, more than 700 categories of items to shop for, low shipping costs, and the lowest of commission for entrepreneurs.

MEESHO is a growing, successful company that shows potential in the way they develop. Over 13 million entrepreneurs have used Meesho to establish their own internet companies with no investment. This entails to their business model, their structure and their way in on campaigning their cause and ideas. Along with entrepreneurship, there are other individuals who make money on reselling. This role can be considered to earn easy money as there is not capital investment required. Just a mode of communication. This middleman roles have helped individuals earn a margin that helps build their growth. The margin fee is also set by the reseller themselves.

Powering through the global pandemic, the company had ventured many ways to enable small businesses stand on their feet by maximising lesser effort provided by them. MEESHO grew from local shops to a socially e-commerce platform that holds upto 10,000+ entrepreneurs. This also is in case of how they attract their audience and how logistically convenient it is for these shops to hold base.

MEESHO follows a b2c business model. A d2c (direct-to-consumer) model is when all forms of middle parties such as resellers are cut out of the equation. This also entails that the supplier/entrepreneur has the main hold in marketing and publicising about their products.

MEESHO has at least two other variants involved other than the supplier and the consumer. The supplier has absolutely nothing to do with the consumer except for if any damages.

The reseller is responsible for all the advertisement of the product and placing orders and the company provides all the logistically services. This form of a business model is what made the venture stand out even as a start up.

How do I promote my MEESHO products?

Advertisement of the product on the platform is done by the reseller. Promotion and advertising the product is done on social media platforms such as Facebook, WhatsApp and Telegram. This engages with people directly and helps them to connect and promote the product better in terms with selling the product. The touch of personality to those interested helps in better sale. This could be through different groups, channels, publicising on personal stories and statuses, whichever helps build the public vision towards the product.

How do you attract customers in MEESHO?

There can be multiple ways to do so, but the most effective to cater to a large set of audience would be through advertisement. This can be through direct advertising or campaign marketing. Promoting your business not product by product by also in catalogs helps show potential customers the more genuine and quality driven your brand is.

On your MEESHO website where the product is uploaded, there are multiple ways to figure out why the product was not bought or returned. This helps you build insight towards what your business might be lacking and then could build into growth there.

How many resellers are on MEESHO?

There are about 17 million resellers on the platform. Reselling is when you take orders from customers and are their direct point of contact for the supplier. The reseller gets to advertise to the customers using social media platforms and along with the product cost, the reseller can set a margin fee as their commission. Reselling is a great way to earn money as there is no capital or investment required to be contributed by the reseller. All they require are advertising skills and multiple social media accounts.

The margin fee to be set can vary from product to product and with different customers but not in an unrealistic manner. And, as stated on their website, a reseller can earn upto 25,000 to almost a lakh per month with their margin fee. Women’s attire can have an increased margin fee compared to any other product on the website, as they are the most selling.